Mini-black hole - was found by NASA

Mini-black hole is smallest ever but still strong 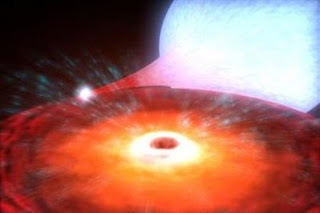 WASHINGTON (Reuters) - NASA scientists have identified the smallest black hole ever found -- less than four times the mass of our sun and about the size of a large city.

But the mini-black hole, dubbed J1650, could still stretch a person into a "strand of spaghetti" with its pull, the researchers told a meeting in Los Angeles.
"This black hole is really pushing the limits. For many years astronomers have wanted to know the smallest possible size of a black hole, and this little guy is a big step toward answering that question," Nikolai Shaposhnikov of NASA's Goddard Space Flight Center in Greenbelt, Maryland, said in a statement.

It would likely be stronger than bigger black holes found at the centers of galaxies. Shaposhnikov said if someone ventured too close to J1650, its gravity would "stretch your body into a strand of spaghetti."

Like other black holes, it was formed by a star that ran out of fuel and shut down, collapsing due to its own gravity.

Shaposhnikov and his Goddard colleague Lev Titarchuk used NASA's Rossi X-ray Timing Explorer satellite and a new method to estimate the size of the black hole, found in a system in the southern constellation Ara, in our own Milky Way Galaxy.

It measures the oscillation of hot gas piling up near the black hole as it sucks in matter, they told a meeting in Los Angeles of the American Astronomical Society High-Energy Astrophysics Division.

The new black hole has a mass of 3.8 Suns and would be about 15 miles across, they estimate. "This makes the black hole one of the smallest objects ever discovered outside our solar system," Shaposhnikov said.

The smallest black hole previously identified was GRO 1655-40, with a mass of about 6.3 Suns.

"Amazingly, equations from Albert Einstein predict that a black hole with 3.8 times the mass of our Sun would be only 15 miles across -- the size of a city," NASA said in a statement.

A collapsing star that was much smaller than J1650 would likely form a neutron star and not a black hole, the researchers said.

Reporting by Maggie Fox; Editing by Will Dunham and Bill Trott)