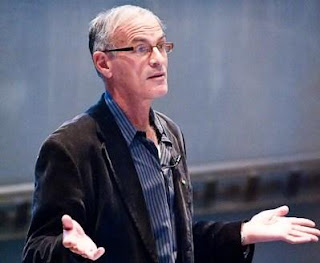 Norman Finkelstein, an American political scientist who specializes in the Holocaust and the Israel-Palestine conflict, is in Egypt for the first time today for a lecture at the American University in Cairo.

Finkelstein’s political and scholarly commitment to the Palestinian issue started with the Israeli invasion of Lebanon in 1982, and continued through the first Intifada in 1987, which he experienced first hand.

However, his personal commitment was born earlier. His parents, both Jewish Holocaust survivors, taught him not to be silent in the face of atrocities committed by Israel against Palestinians, which are in essence, they said, a repetition of the atrocities committed by the Nazis against the Jews. It is a lesson he frequently mentions.

After visiting Tahrir Square, and before attending a protest in front of the Israeli Embassy to Cairo, Finkelstein sat with Al-Masry Al-Youm to discuss how the Egyptian revolution and the changing Middle East might affect the Israeli-Palestinian conflict.

Al-Masry Al-Youm: What are your fears and expectations about the future of Egypt?

Norman Finkelstein: Obviously, everybody is hopeful about what’s happened, but I think everybody understands that a lot more needs to be done. I guess the main concern is that the counter-revolution has a clear idea of what it wants. It wants to keep the essentials of the old system and make just superficial changes. There does not seem to be a consensus among those who managed to get rid of Mubarak of what they want next. That to me is the most worrying.

Al-Masry: How do you analyze the current situation in the Middle East and its impact on the Israeli-Palestinian conflict?

Finkelstein: The first revolts – because I am not really convinced with the term "revolution" – went pretty quickly in Tunisia and Egypt, but now the counter-revolution is pretty well organized. In my opinion, the big disaster was Libya, because it raised the threshold dramatically and it gave to Western media an excuse not to look at what was going on in places like Bahrain and elsewhere. Before, death counted. Now that it turned into an armed struggle, life has become much more cheap, and that made non-violent struggle more difficult.

The good thing is that now Egypt is playing an active role in trying to resolve the [Israeli-Palestinian] conflict. I was heartened when I read the statement last week by the Egyptian Foreign Ministry that [Egypt] does not want to talk about the "peace process" anymore; it wants to talk about peace. That seems to be transmitting the message that the Egyptians do not want to talk anymore – they want action.

The Turks have pretty much the same attitude, as well as Europe – which wants the end of the conflict – and other movements in South America. So I think there is reason to be hopeful. If Egypt applies pressure now, maybe something will happen.

Al-Masry: Some segments of the population considered the demonstrations in support of Palestine a dangerous distraction from the internal situation and the need to achieve stability.

Finkelstein: I kind of feel that a little, too. The focus has to be internal. The gains have to be consolidated, and there is a danger, because the other side is looking to reverse those gains. And there has to be a little care not to invest the whole thing in the Palestine issue.

But of course, some people are telling me that there are Egyptians who say this was their revolution, it was not Arab revolution. There is an element of chauvinism by some Egyptians in this desire to separate themselves out, which is very silly, because it is quite obviously an Arab revolution. Revolutions have been confined to the Arab world and not spilled over into Pakistan.

Certainly, the spirit of the revolution was unity. Young people do not want to have anything to do with these sectarian divisions between Copts and Muslims. My guess is that there are some sectarian elements – some but not as significant – and there are a lot of people who are stirring up a lot of troubles. Israelis are stirring up troubles.

If someone asks me if they are behind one of the church bombings, I would say that I believe that. Israel has a history of that. Think about the Lavon affair in 1954. That wouldn’t surprise me. I think Israelis are part of the internal counter-revolution because they are very upset about what is happening in Egypt. They were so close with Mubarak that for sure they have connections with the internal security and with the main counter-revolutionary elements.

Al-Masry: What is the role of Egypt in the Egypt-brokered reconciliation between Hamas and Fatah?

Finkelstein: I think this is very significant, because I do not think they would invest their energy in that unless they wanted there to be results. It could be decisive. If both Turkey and Egypt strongly come out for a settlement of the conflict, it could make a big difference. The other big factor is if the Palestinians would simply do what was done in Egypt, get together in millions and force the Israelis out. I am not optimistic about that, but if that happens it would be over for Israel, then they would have to withdraw. They could not get away with shooting a large number of Palestinians because they would look too much like Syria and Libya.

Al-Masry: How do you see the future relations between Egypt, Israel and Palestine?

Finkelstein: Egypt does not want to go to war with Israel. It wants its basic rights, as does Turkey. Both want to be treated with respect and not to be taken for granted and to be walked over. Egypt will defend its own regional interests, which are not the same as Israel’s interests. Now Egyptians and Turks want Israel to make room for other powers in the region. I do not think Egypt wants more than that.

Al-Masry: Will the current international position toward Israel remain the same after the presidential elections?

Finkelstein: It depends on who will be elected. Personally, I think the best candidate for Egypt is ElBaradei, even though there are a lot of problems. But he has to work with the makers of the revolution. He has the wisdom and the expertise, but he needs a popular base, which he does not have.

Al-Masry: He is often accused of being a foreigner.

Finkelstein: ElBaradei is a proud Egyptian and he wants to restore Egypt to its rightful place in the region, so I do not consider him to be a foreigner. The bigger problem is that he comes from the elite and he does not feel comfortable being among the people. But the youth has the energy and it is not afraid of being among the people. They do not really have the knowledge when they are maneuvering with the big powers, therefore they need someone who knows what is going on and who feels confident. ElBaradei has that confidence.

So there has to be a partnership, and each has to be humble.Young people cannot work for him but with him, and he has to understand that.

Behind the closed doors, the whole Clinton administration is working with all the remnants of the Mubarak administration and intelligence forces, along with the Israelis, on how to freeze this. It makes me a little nervous that the revolution does not know how to proceed now.

Al-Masry: How is the "third Intifada", called on 15 May, related to the ongoing uprisings in the Middle Eastern countries?

My impression with Palestinians is that the spirit is still not there yet. The only place where there was a pro-Mubarak demonstration, organized by the Palestinian Authority, was the West Bank. Palestinians became quite cynical about politics. For now they watched what happened in Egypt, but they did not do anything.

Al-Masry: How is the counter-revolution preventing real change and democratic transition in Egypt, and to what extent is this related to the key position Egypt has in the area?

Finkelstein: Egypt is a strange place, because you can never tell whether they are naïve or hopeful. There seems to be a lot of faith in the army, but I am not sure where that comes from. Is it naïve or are they just hoping they will not have to enter into a conflict with the army to achieve their goals? The Egyptians seem to have forgotten what the American role was during the revolution. The US was completely against it until they could not do anything anymore.