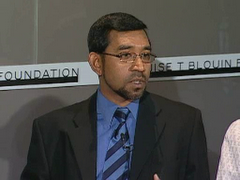 Published in The American Muslim

Last November the Malaysian government refused to release 10,000 Bibles it had seized because they contained the word Allah to refer to God. The Herald, a publication of the Roman Catholic Church in Malaysia, challenged the government’s decision to ban for non-Muslims the use of the word Allah to refer to God. In December, a Malaysian court ruled that such a ban was unconstitutional. The court’s decision provoked anger among some Muslims. The Times reported a speaker in a Kuala Lumpur mosque as saying, “We will not allow the word Allah to be inscribed in your churches. Heresy arises from words wrongly used. Allah is only for us.” A few Muslims unfortunately went further and attacked churches, badly damaging some of them. Such actions are condemnable as they contradict normative Islam.

Attempts by Malaysian officials to explain the logic behind the initial ban and why the government is now opposing the high court’s ruling have been far from convincing. The best analyses point out this unusual move by the ruling UNMO government had less to do with theology and more to do with the ruling political coalition keeping control. The fact that politicians were fanning the flames of passion is hardly news. But it does point to a troubling underlying fact that many Muslims erroneously believe they have monopoly over the use of the word Allah—in essence, asserting that the Christian God is different from the Muslim God. This is oxymoronic because normative Islam insists that there is no God but God, meaning there cannot be a God for Christians and a different God for Muslims.

In A Common Word Between Us and You: An Open Letter and Call from Muslim Religious Leaders, issued in October 2007 to “Leaders of Christian Churches, everywhere,” acknowledges that the theologies of Christianity and Islam differ from each other on key points. Yet, when this Muslim-authored document speaks of “God”, the word denotes the subject and object of Christian worship, too. This pan-Muslim call for dialogue and cooperation is predicated on the notion that the ground shared by Muslims and Christians is located in our respective scriptural mandates to love God and neighbor. Five distinguished Malaysian scholars and government officials were among the original signatories of A Common Word.

While, in the American context, we don’t have legislatures reserving vocabulary for the exclusive use of one religion, we certainly have had occasions of suspicion-casting over matters of God-Talk. It finds its way regularly into political campaigns. Each of us have encountered it in venues where we have been asked to speak about Christian-Muslim relations. Both of us have had to deal with Christians who say of Muslims, “They worship a different god;” or, “there is some question as whether their god is the same as ours.” Much of the internet back-and-forth about this reveals considerable ignorance (about the writer’s own religion, let alone the religion she or he is criticizing).

To our way of thinking, however, discussions as to whether Christians and Muslim “worship the same God” are, even when well-articulated, based on an ill-founded premise. To ask whether another group “worship the same God as we” is to imply that there are indeed at least two gods. The technical term for such a stance is henotheism—i.e., the notion that there may be more than one god, but only one of them works for me (or, for my group). On the other hand, Muslims and Christians (and Jews, Sikhs, Bahá’ís, Zoroastrians) all claim to be monotheists; and, the logical corollary of monotheism, “belief that there is but one God”, is that, no matter who is praying, only one Possibility is listening, whichever way that Ultimate Listener is named or described.

The vast majority of religions do operate from a presumption that there is an Ultimate—a single Source. Most Americans, regardless of their religion, are happy to employ the English word God when referring to this. However, each theistic religion has its own theology—its own way of describing God and God’s relationship to the physical and spiritual realms. God may have many names, and concepts of the spiritual realm may be quite complex. Yet God is God; Allah is God; God is Allah. For the love of neighbor, may we be willing to affirm that—whatever language we use?

[Prof. Parvez Ahmed is a U.S. Fulbright Scholar. He is Associate Professor of Finance at the University of North Florida. Dr. Lucinda Mosher, is a consultant and educator on inter-religious matters. She is the author of the book series Faith in the Neighborhood.]