Inflation comes at a bad time

Not easily pleased. (Bullit Marquez/AP)Okay, there’s never a good time for high inflation. But the big jumps in commodity prices, which are now turning into generalized inflation, have come at a particularly awkward moment for much of Asia, as Keith Bradsher writes. Now the region faces a difficult problem: how to choose an appropriate economic policy without too much political fallout. 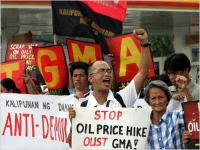 Countries big and small, from China to Cambodia, were already growing extremely quickly when the latest wave of inflation struck. In some places, the fast growth was a deterrent to political instability; people don’t tend to complain when they’re getting rich. Yet over a year ago, economists (myself included) began to warn about overheating - when an economy grows so quickly that demand outstrips supply, prices spiral skywards, central banks are forced to clamp down, and the economy is cast into recession.

The added pressure of global inflation means central banks may have to act sooner rather than later. But in the meantime, governments must face a clamor of discontent from their citizens, who want help confronting high prices. Some governments have actually cut expensive subsidies on gasoline, but their remaining subsidies on energy and food just add fuel to the fire of inflation. If they ban exports to enhance domestic supply, their own producers may cut their output. There are no good options, only second-bests. And it’s not just happening in Asia - countries in South America and Africa are facing the same dilemma. How can people who want more make do with less?

I am from China. Yep,I totally think inflation comes at a bad time. In my opinion, inflation is not just economic problem, but also political issue.

At this moment, governments must do somethings to their citizens’ benefit. [A] balanced point between native/own producers and their citizens must be found. The two sides can endure acceptable losses, and that is win-win. For instance, on the one hand, to order those producers to reduce goods and food prices to some degree, and then, governments offer some subsidies to them. On the other hand, to supply welfare for relatively poor people.

The epicenter of inflationary storm is centered in Asia; generalized global inflationary markets, inflation ranging from 8% to 7% in china and other east Asian countries; demand for higher wages and to raise interest rates etc by central bankers and what is the finding and cure suggested by these central bankers? there is high liquidity in the market fueling spiraling prices, and there fore collective action to reduce the liquidity from the market to reduce prices. very good academic or practical brains.

They have forgotten that the artificial rise in prices of oil and certain agricultural commodities due to overt acts of either monopolistic/ cartel producer or suppliers of oil and they are draining the blood/liquidity of all other countries in the form of expropriation through prices due to imperfect global markets through national political actions and this rise in prices is counter balanced through economic spread of burden to the consumers through corresponding price rises resulting in general price rise and this factor is being ignored. the cause for inflation is being mixed with effects I.e money prices and liquidity. As long as cause exists and corresponding effects in global price rise and so also the money price rise will do till new equilibrium is attained to the new reality with disease persisting.

Then one may ask why do two digit inflation in Asia and other small countries and one digit in US and EU and other major economies; it is because, other things remaining constant, the percentage of total gross product of countries varies in distributing the the burden and the higher the capital and income base of economy the lower is the rate of inflation and so is the case with varying rates of inflation in percentage terms.

Posted by: S Lakshma Reddy — 23 July 2008 6:21 pm
Food and petroleum production is way too problematic in terms of time and response to price instability in order to clearly describe supply responses. Production for both is extremely sticky and instability and high cost of credit only makes it moreso; further consumption for both has a limited ability to change direction in the short term.

(From the United States)

Posted by: Tucker Morgan — 23 July 2008 6:56 pm
Inflation is not merely an economic malady; it is a sociopolitical problem as well, particularly in the context of developing economies. This is so not least in China: witness that a major contributing factor towards the 1989 Tiananmen incident - a tragic one at that - was soaring inflation. Further, history provides a litany of examples on how inflation could wreak politico-economic as well as social havoc worldwide. The developing world, of which Asia is part and parcel, would be well-advised to pursue more flexible exchange rate regimes than those currently extant so that they might pursue more independent monetary policies with a view to whipping inflation now. This comment applies with vehemence to the so-called dollar bloc of which China is arguably a member and Hong Kong, whence I hail, is definitely one.

Posted by: Peter Kam-ming Ip — 23 July 2008 9:14 pm
As it is happening in South America, the government has to reduce expenditures and to increase taxes to the high income groups; to foster the production of greater amount of food giving land and resources to peasants and increase productivity; to look for foreign investment in new enterprises and to reduce incentives for speculative investments; to balance exports and imports; and to increase investment in research, in new products and to establish measures to guarantee that the production processes are environmentally friendly. A policy of family [planning] to keep the population growing at a lower rate is also desirable, which requires providing greater education and employment to women.